← more from
vlek
Get fresh music recommendations delivered to your inbox every Friday.
We've updated our Terms of Use. You can review the changes here.

from HOST by Lawrence Le Doux 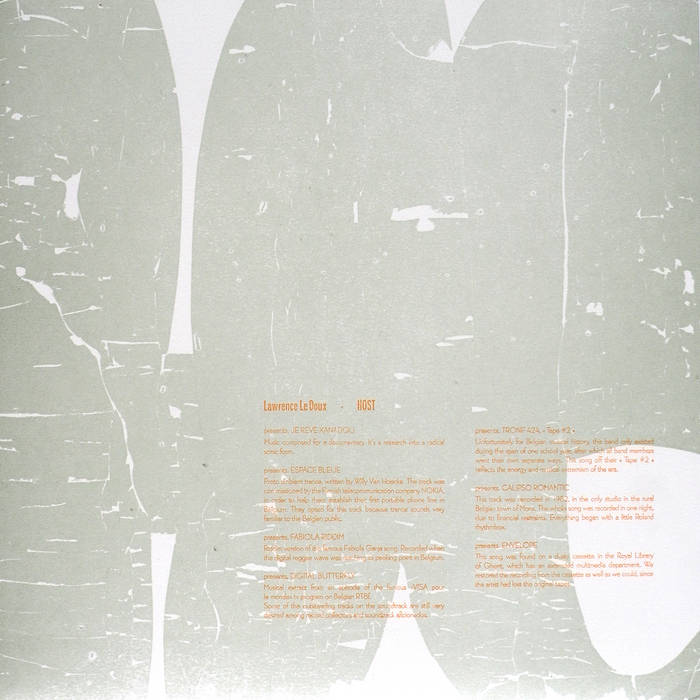 'Fabiola Ganja' was a song written in the early nineties by Freddy Dansaert, who dedicated it to then-queen Fabiola, wife of King Baudioun the 1st. After a fire broke out in the squat house in Brussels where Dansaert lived, the cassette with the 'Fabiola Ganja' song ended up in the hands of fireman-in-chief Rudy Appermans, who happens to be the father of Lawrence Le Doux' wife Anne. Ever since, it has been a firm staple at the Le Doux household. Since the cassette had worn down over the years, Le Doux decided to record a new riddim version of his favorite track in collaboration with Freddy Dansaert, to ensure the recording sounded exactly the same as the original.

The cassette with 'Fabiola Ganja' was actually one of the only known artefacts to have survived the Belgian wave of digital reggae. The genre reached the country in the beginning of the nineties, as always a couple of years later than in the UK. For a while, it was a major thing, especially in a community that was squatting the basement of Tour & Taxis, a then abandoned event hall in the center of Brussels that once used to be the largest train station in the country. Shortly before the turn of the decennium, the community had known a new injection when a whole circle of pot-loving new wave studio musicians moved in, one of them being Freddy Dansaert.
Gone were their heydays of playing instruments on seminal Crammed and Les Disques Crepuscules records, but the musicians could still live from the money they earned in previous years, whilst enthusiastically absorbing and reproducing all the dubby punk and new wave sounds that had been coming from UK bands like Lifetones, P.I.L. or A Certain Ratio for a while. When digi dub and reggae started making waves and Mikey Melody and Gregory Peck records were being played at the squat parties, many of the skilled keyboard musicians there were attracted towards the new vague, and trying out things for themselves.

However, because of the hazy atmosphere of the community and since no record labels at the time were interested in their sound, the Belgian digi scene mostly gravitated around underground live performances and jam sessions, meaning that it somehow forms a blind spot in the national music history. In that sense, giving 'Fabiola Ganja' a proper release feels like rescuing it from oblivion for the second time.

Bandcamp Daily  your guide to the world of Bandcamp